More About This Cottage

Near Castlewellan, County Down.

ABOUT ME Passionate About Story-Telling 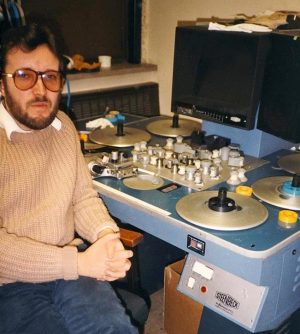 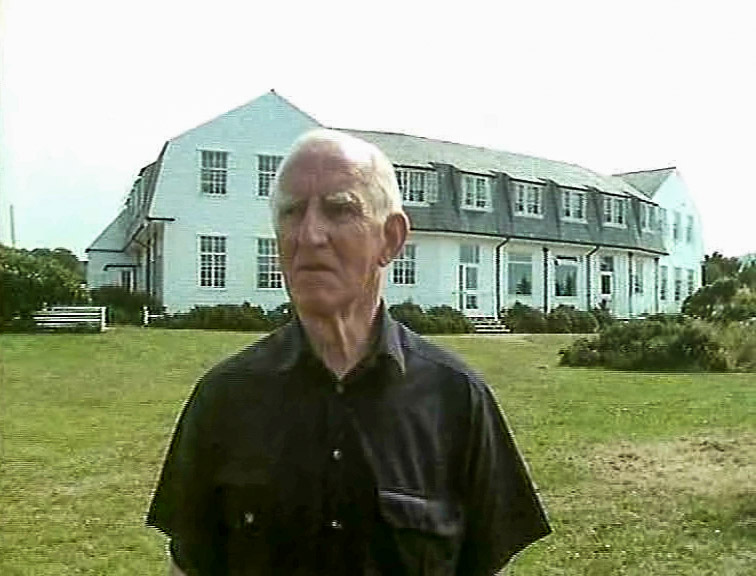 Ray Davey, Founder of the Corrymeela Community, outside the old Corrymeela House, Ballycastle. (1989) 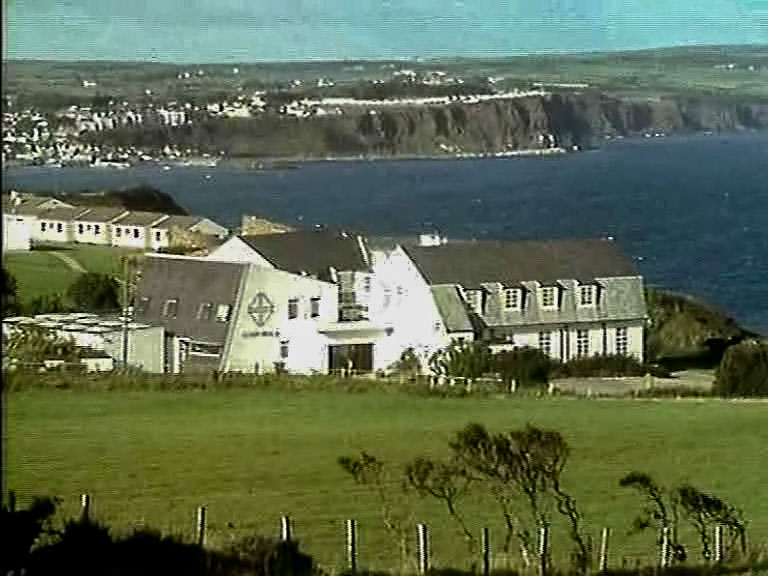 The old Corrymeela complex as it was in the 1980’s, with Ballycastle village in the background. 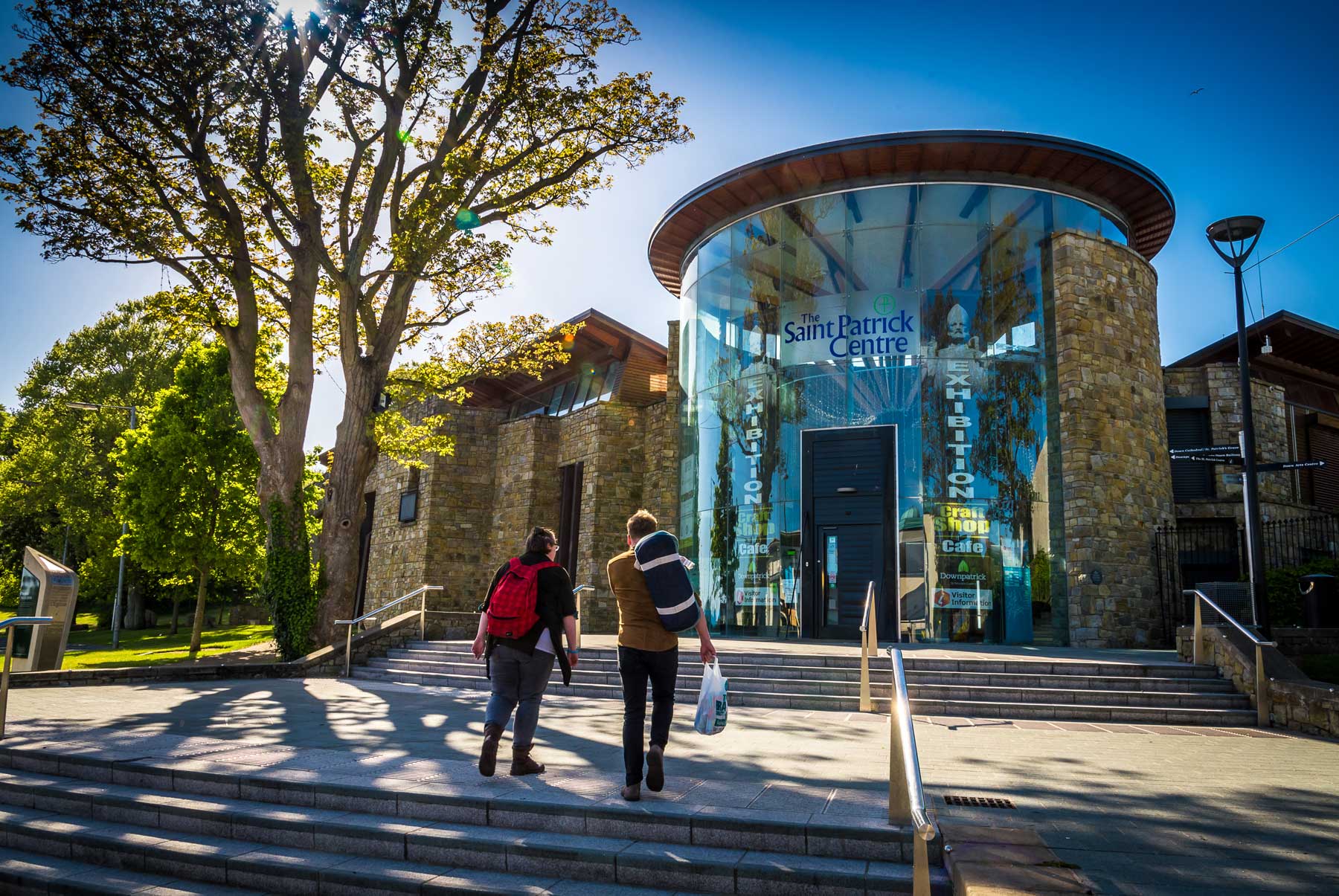 St Ptrick’s Centre, Downpatrick, a good starting point for a tour of historic sites
I am passionate about story-telling, especially through using visual media – photography, film-making, YouTube and other Internet-based, social media content outlets. I’m equipped to conduct interviews on location, in studio or online whether for video or audio only. Services I have provided for video and podcast programming include scripting, narration, editing and production.  I also have experience in setting up complete Internet Radio stations.
My media career began in 1979 when I joined the staff of BBC Northern Ireland to train as a film editor.  Later, I had the chance to produce and direct TV documentaries and after 12 years on staff, left the BBC to set up the independent TV production company, Callister Communications.
In this new role I continued to carry out work for the BBC as well as other broadcasters as an independent producer/director. My company also offered broadcast editing facilities to other independent TV producers. New opportunities and business ventures opened up including setting up a network of remotely-controlled adverting screens in public places across Ireland, north and south.
During my career, especially in the 1980’s, I helped package too many broadcasts about bombings and shootings which went around the world. I vowed then, that if God would heal our troubles, then I would spend as much time sending positive stories from Northern Ireland to the world, as I had spent sending negative ones.
These days, I love to focus on the beauty, relative peace, and potential for Northern Ireland to be a prosperous and attractive country; a magnet for visitors and a beacon of peace to the world. To that end I’ve created  the  website, peacenireland.com as an international platform for visuals and stories from Northern Ireland and the island of Ireland. The website had a ‘soft launch’ on St Patrick’s day, 17 March 2020. Due to Covid-19, it’s very much a work in progress.
So that’s enough about my story! What about yours? Have you a story from the troubles? Or a story from anywhere that could simply inspire others?  If you have a story that I could use for a blog or a broadcast, etc., then I’d love to hear from you. Please send even an outline at this stage to  john@callister.tv  Many thanks! 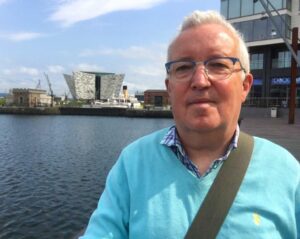 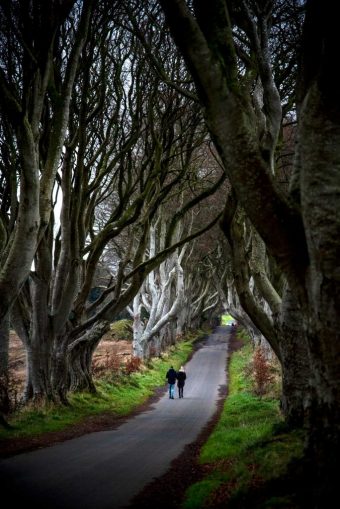 Love shooting stills and video at tourist locations in Northern Ireland. In particular, those that have stories behind them. 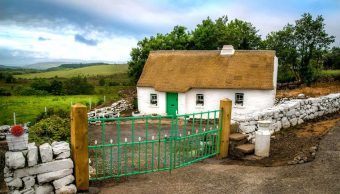 I was privileged to produce the story of Margaret Gallagher and her cottage in Belcoo, Co.Fermanagh, for BBC N Ireland, in the 1990’s. Remarkably, it’s still as popular in 2021, with more than 2.7 million views on You Tube and over 3500 favourable comments. 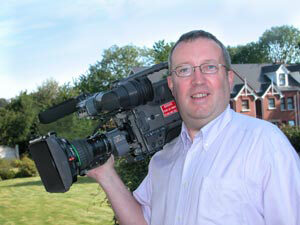 Feel blessed to have had a career doing what I love doing – filming and photography, as well as editing BBC network drama and also producing and directing broadcast documentaries.

Two of the Foremost Peacebuilders of the Twentieth Century

When Kathleen Davey told me (when she was in her seventies and I was still in my thirties) that if she and Ray had their lives to live over again, they wouldn’t want to change a thing, I was hugely challenged by her remark.  From that moment on, I knew that I wanted to ‘learn’ from them.
If Ray and Kathleen had been raised in wealth and had lived relatively trouble-free lives, those words would not have been so thought-provoking. But the fact is, Ray spent three years during world war two as a prisoner of war in six different prison camps. Now, here they were, spending their lives as a married couple during the height of our Troubles, helping to promote peace and reconciliation in Northern Ireland.
They had a philosophy for living, where they saw themselves as agents of God’s love and peace in this world – as part of the answer to the problems in our troubled country and the wider world. What attracted me to this couple was their obvious sense of ‘contentment and purpose’. 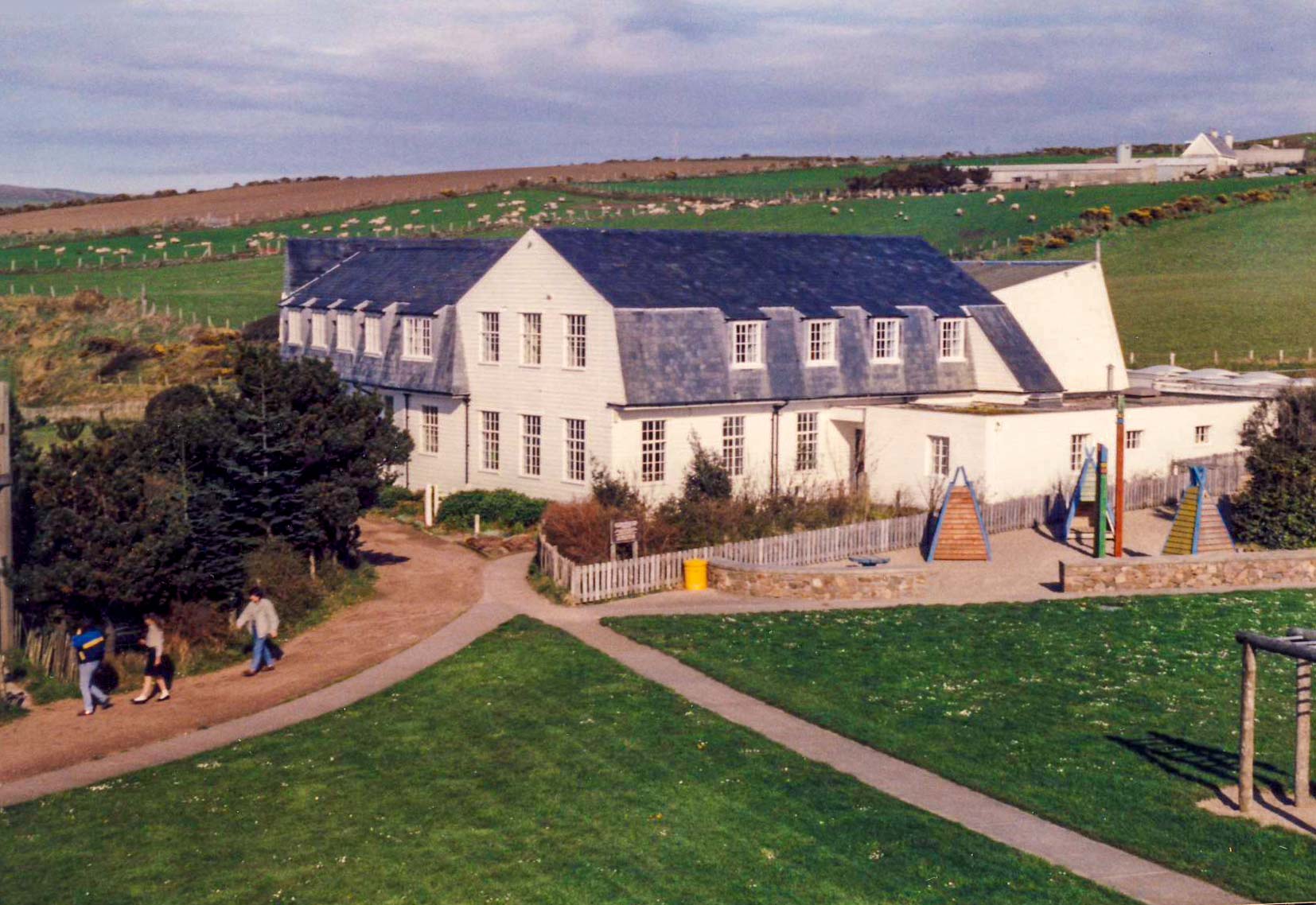 Corrymeela House, Ballycastle, County Antrim, as it was during the 1980s. 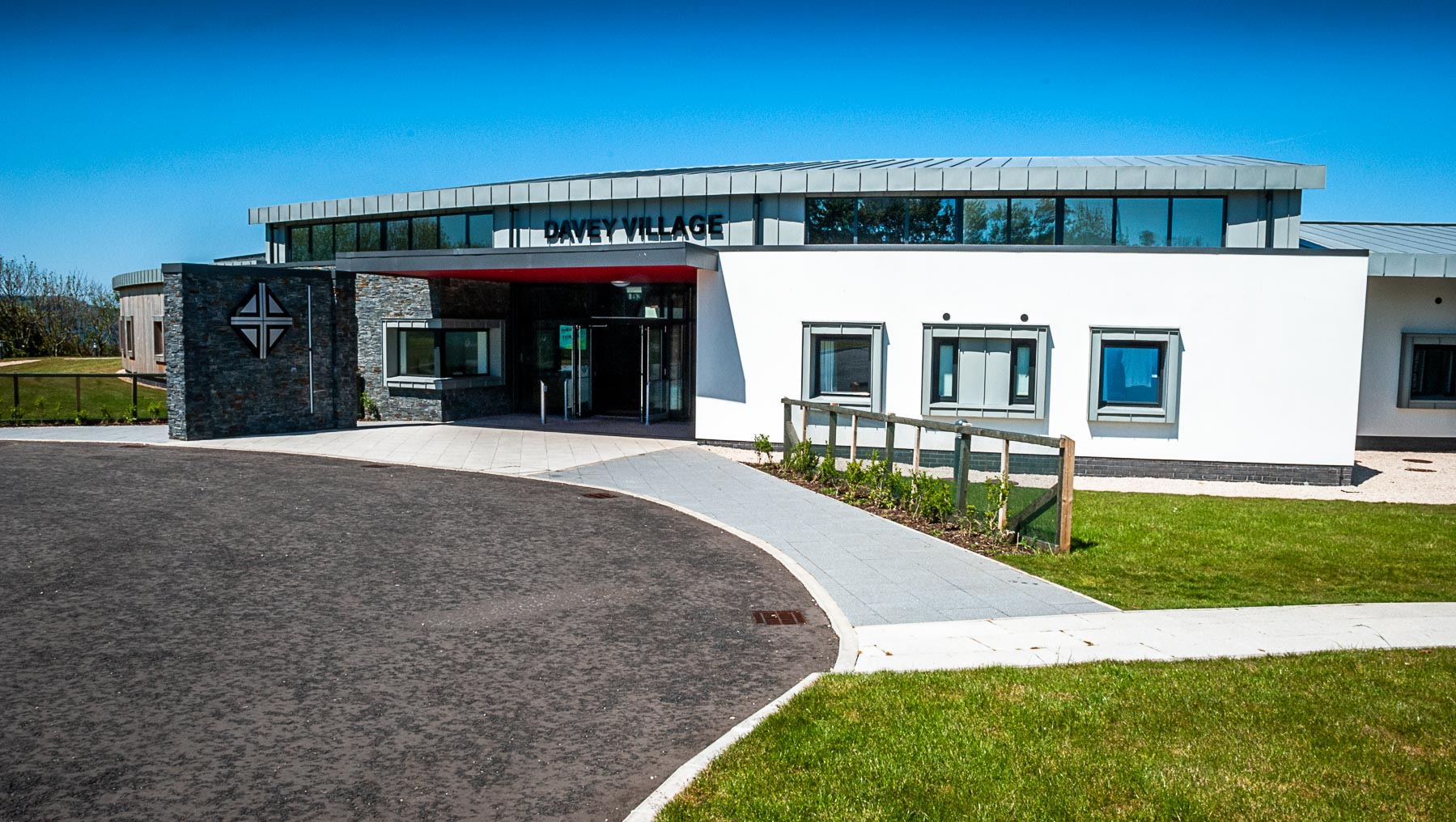 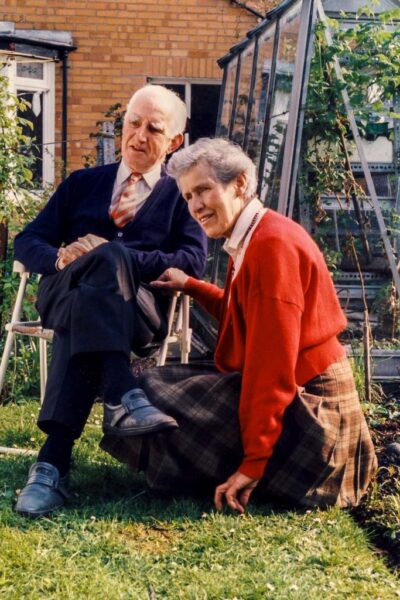 Ray and Kathleen Davey, photographed in 1989
Ray and Kathleen lived as part of a ‘wider picture’ in which they didn’t focus on the world as things were, but as how things could be. Iw was motivated from the Lord’s prayer, “thy will be done on earth as it is in heaven.” In the context of our Troubles in Northern Ireland, they created, at Corrymeela, a microcosm of how our country could be. Where people were free to be ‘different’ yet feel accepted and respected, not threatened. They held the vision for a country of beauty, respect, love, spirituality, and above all, peace. And I knew that I wanted to ‘learn’ from this couple – to be mentored by them.
What a privilege it was for me to get to know them, to spend time with them at their home as well as at Corrymeela as I researched and ultimately produced a TV documentary about their lives and work. “ The Path of a Peacemaker” was broadcast by the BBC to mark the 25th anniversary of the Corrymeela Community. I have them to thank for the decision to remain in Northern Ireland at a time when I wanted to leave because of the Troubles.
I’m dedicating a blog category to expand on how their lives spoke to me, and how what I’m now doing was hugely motivated by their influence.
Click HERE for Path of a Peacemaker screenshots gallery 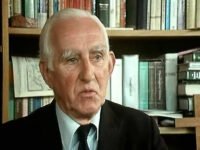 Ray Davey, Founder of the Corrymeela Community
“Corrymeela and the many other Christian communities in Ireland see themselves as spiritual descendants of Patrick and Columba. We seek to carry on their message. While so many things have vastly changed, the message of Christ the Prince of peace does not change.” Ray Davey

St Patrick Learning about him and from him

I’m currently working on photography and film projects relating to St Patrick-related sites around Ireland, north and south. My goal is to partner with tour operators, guides, bus companies, accommodation and conference providers, historians and others who may have an interest in St Patrick and the creation of peace-themed tours in Ireland.

The Saint Patrick Centre in Downpatrick, is a good starting point to discover and follow St Patrick’s trail. 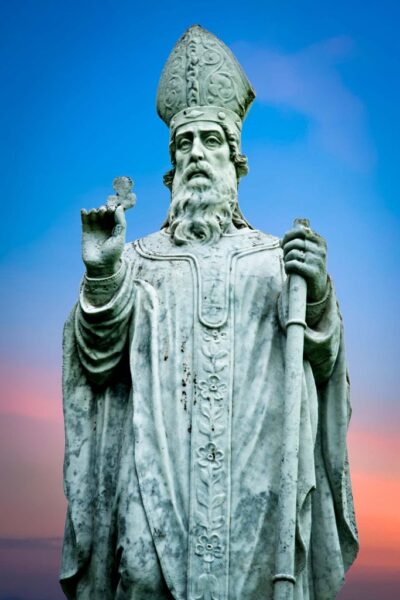 Need help getting your story out there? We have decades of experience helping businesses, non-profits, churches, and individuals, promote their story or message on social media or publication, online or off-line.

If you’re interested in self-publishing your own book we can help. My team has helped a number of people with all aspects of self publishing, including ghost-writing, editing, cover design, interior book design, ISBN, proof-reading, etc. Then we help with video ads, cover photos, PR, dedicated and branded websites, sales outlets and distribution.

Don’t forget to join the more than 3 million viewers on YouTube and more than 4000 who have made favourable comments re my documentary film about Margaret Gallagher from Belcoo, Co. Fermanagh, and her thatched cottage without modern amenities. It’s on YouTube at this link:  https://youtu.be/lRL9iIN3R8s

I’d love to hear from you. Please email me at john@callister.tv

This website uses cookies to improve your experience while you navigate through the website. Out of these cookies, the cookies that are categorized as necessary are stored on your browser as they are essential for the working of basic functionalities of the website. We also use third-party cookies that help us analyze and understand how you use this website. These cookies will be stored in your browser only with your consent. You also have the option to opt-out of these cookies. But opting out of some of these cookies may have an effect on your browsing experience.
Necessary Always Enabled
Necessary cookies are absolutely essential for the website to function properly. This category only includes cookies that ensures basic functionalities and security features of the website. These cookies do not store any personal information.
Non-necessary
Any cookies that may not be particularly necessary for the website to function and is used specifically to collect user personal data via analytics, ads, other embedded contents are termed as non-necessary cookies. It is mandatory to procure user consent prior to running these cookies on your website.
SAVE & ACCEPT